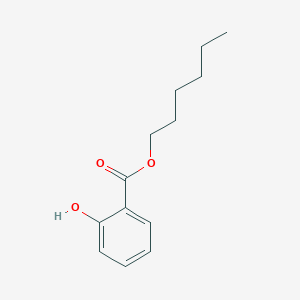 What is hexyl salicylate?

Hexyl salicylate is a synthetic fragrance compound also known as benzoic acid, 2-hydroxy-, hexyl ester (source). A chemical cousin to salicylic acid, it's created through the esterification process sometimes using a tin-based catalyst, or by a reaction between methyl salicylate and n-hexanol using a sodium methoxylate catalyst.(source)(source)

Hexyl salicylate has not found to be a reproductive, developmental, or neurotoxin itself. However, according to research, the body breaks hexyl salicylate (and other salicylate compounds) down to salicylic acid. Salicylic acid has been found to be a teratogen (aka can cause birth defects) in animal studies in high doses, and may inhibit the metabolism of estrogen. (source)(source)

Hexyl salicylate is made from synthetic chemicals, as noted above. Since no animal products are used, it can be considered vegan. However, it is not plant-derived.

Hexyl salicylate is known to be "[v]ery toxic to aquatic organisms, may cause long-term adverse effects in the aquatic environment. This material and its container must be disposed of as hazardous waste." It appears to be persistent in the environment in aquatic systems. (source)(source)

Is hexyl salicylate a skin irritant?

Hexyl salicylate is not typically a skin irritant as-used as a fragrance ingredient in a concentration below 3%. It has been found to be an irritant in animal testing when applied neat to skin. One animal study found to be sensitizing at a 5% concentration. (source)

(Having a rash from using natural deodorant? This might be to blame.)

Hexyl salicylate is a synthetic fragrance chemical that some organizations consider to be a "safe synthetic." However, its metabolites may be reproductive toxins, it's highly toxic to the environment, and has to be handled as hazardous waste.

Chemical of the Day Blog