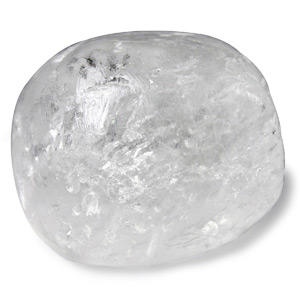 Most crystal deodorant stones are made from alum, which may also be listed as “mineral salts.” What could be wrong with that--isn’t it just a mineral and a salt? The most widely-used form of alum used in the personal care industry is potassium alum--the full chemical name of which is potassium aluminum sulfate.

While potash alum does naturally occur in mineral deposits such as alunite and kalinite, the deodorant stones are manufactured in this less-than-environmentally-friendly way, shipping ore from overseas and using toxic chemicals like sulfuric acid. The stone manufacturers claim that alum is a mineral salt, "similar to that found naturally in the earth's crust." Radioactive uranium is also found naturally in the earth's crust, but that doesn't mean you'd want to use it as a deodorant.

The acute toxicity of potassium alum is quite high. There have been cases of people who have died from ingesting only 30 grams of alum...that's only one ounce of product. To give you an idea, an average deodorant stone is about 4 ounces---so if a larger chip off a deodorant stone were to break off and be ingested, it could be lethal (especially to a child). (source)

Unlike some other metals such as potassium, sodium, or magnesium, aluminum has no benefit or function in the body.

■ Aluminum creates oxidative stress on cells throughout the body, causing damage to DNA and aging on cells. (Source)

■ Aluminum-containing anti-perspirants keep the body from sweating and properly releasing hormones out of the body. This is a suspected cause of breast and prostate cancer. (Source)

■ Aluminum accumulates in bone tissue, thus weakening it. (Source) It is a suspected cause of osteoporosis.

■ "Once absorbed, Al accumulates in bone, brain, liver and kidney, with bone as the major site for Al deposition in humans." (Source)

■ Aluminum robs the body of magnesium, calcium and iron, and accumulates in the brain. "Trace aluminum levels cross the bloodbrain barrier and progressively accumulate in large pyramidal neurons of the hippocampus, cortex, and other brain regions vulnerable in Alzheimer's disease. More aluminum enters the brain than leaves, resulting in a net increase in intraneuronal aluminum with advancing age. Aluminum is responsible for two main types of toxic damage in cells. As a pro-oxidant, aluminum causes oxidative damage both on its own and in synergy with iron. Aluminum also competes with, and substitutes for, essential metals-primarily Mg2+, iron and Ca2+ ions-in or on proteins and their cofactors." (Source)

■ Aluminum has been found to cause granulomas. (Source)

■ Aluminum is toxic to skin and creates oxidative stress (Source)

■ Aluminum is absorbed highly by abraded or irritated skin. (Source)

Manufacturers of crystal deodorants will claim that the molecules of alum are “too large” to be absorbed, but evidence proves otherwise. A French study published in the Journal of Biomedical Materials Research explored the effects of aluminum ions on collagen. As stated in the study's introduction, "Heavy metal ions are capable of inducing crosslinking between peptide chains of collagen. The metal ions improve the capacity of collagen to resist denaturization as well as the attack by enzymes, bacteria, and chemical agents." [p 1339]

In other words, metal ions have been found to stabilize collagen. This is a process that is used in the leather-making industry (known as "tanning" hides) and in some medical devices/products. The researchers treated collagen with aluminum ions and found that it became significantly dehydrated. They concluded that "the substitution of water molecules by aluminum ions on intramolecular hydrophilic sites is suggested to be responsible for this evolution." In other words, the aluminum ions substituted the water molecules in the collagen, thus drying it out. This may explain why alum has a drying effect on skin, as it robs the collagen of its moisture, aluminum ions replacing water molecules. Through this we know that alum is absorbed in to the skin in some fashion.

There is no evidence to suggest that alum is not absorbed in to the skin, as crystal deodorant companies would want you to believe. In recent years, vaccine powders have been studied as an alternative to injectable vaccines. They've found that these powder vaccines can be just as effective and viable as an injectable vaccine. The powder vaccine is made up of three primary ingredients, a natural powder like mannitol, the active antibodies, and, you guessed it, alum. (Here's one Study)

In this case, even in its crystalline form, alum proves to be a potent ingredient that helps other ingredients absorb into the skin and become active in the body.

They will talk about how harmful “synthetic” aluminums are, yet hide the fact that their product is pure aluminum salt. Yes, it is a “natural” form of aluminum, but that does not make it healthier.

The bottom line: Crystal deodorant stones are not free from aluminums and contain a higher amount of aluminum than a prescription-strength antiperspirant. You've probably heard that you shouldn't cook acidic foods in aluminum cookware because of the potential for leaching aluminum. That’s ionic aluminum--the same form of aluminum that’s released on to your skin when you wet a deodorant stone.